After damaging it’s propeller, the Antarctic Chieftain became boxed in by ice floes. RCCNZ worked with the United States Coast Guard to rescue the 26-person crew trapped aboard the fishing vessel.

Maritime New Zealand ©2023
Recently, RCCNZ was involved in the rescue of the Antarctic Chieftain.

Thirteen New Zealanders were among the crew that was freed from the ice five days after having to call for assistance. The US Coast Guard icebreaker CGC Polar Star steamed several hundred nautical miles to reach their position.

An Australian-flagged vessel, the Antarctic Chieftain got into difficulty after damaging three of the four blades of its propeller. Although it was immediately surrounded by clear water, the vessel became boxed in by ice floes about 900 nautical miles (1700 km) northeast of McMurdo Sound; at the eastern edge of New Zealand’s search and rescue region. 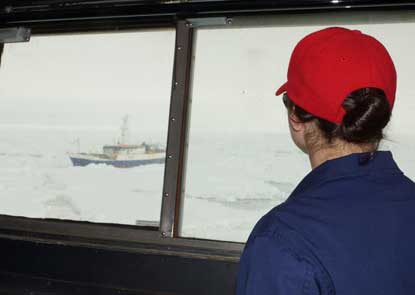 The Antarctic Chieftain as seen from the window of CGC Polar Star.
Maritime New Zealand ©2023

After breaking the ice around the 63-metre Antarctic Chieftain, the crew of the cutter deployed an ROV (remotely operated underwater vehicle) to assess the vessel’s propeller.

Mike Hill, Manager RCCNZ & Safety Services, says the hull of the boat had remained undamaged, there was no spill of oil from the vessel, and the crew were well-provisioned.

The Polar Star towed the stricken vessel back to clearer waters, where the RCCNZ had also coordinated with shipping companies to have a former sister ship, Janas, standing by in case further assistance was required.

Both vessels were toothfishing in the region for the summer season.

Once clear of the ice, the Antarctic Chieftain managed the return journey under its own power over the next two and a half weeks, reaching its home port of Nelson, New Zealand, for repairs on March 3.

Les Scott, the Managing Director of the vessel’s owner, Australian Longline Pty, says “we would like to offer our most sincere appreciation of the quick and professional response given”.

“We’d especially like to thank RCCNZ for managing the operation; along with the Master and crew of the Polar Star for the professionalism and support given to the Chieftain in getting it to a safer position. We are also very grateful to the crew and owners of the Janas for providing the Chieftain with the escort back towards NZ.”

“Based on what we have heard from the crew of the Chieftain, it is apparent that the freeing of the vessel was skilfully undertaken by the crews of both vessels thereby avoiding a situation which could have become significantly more concerning.”

Next: Crewman collapse at sea