To prevent pollution of the sea from garbage, New Zealand has strict regulations in place that all vessel operators need to follow.

New rules further restricting the disposal of garbage (or marine debris) from ships, pleasure craft and offshore installations entered into force on 17 January 2013.

Changes to the Marine Protection Rule Parts 131 and 170 , covering the discharge of garbage from offshore installations and ships, respectively, have been made to address the ongoing problem of garbage pollution in the sea.

The rules and advisory circular provide further information, but a general outline is provided below.

Garbage pollution in the marine environment

Garbage (also known as marine debris) can be particularly persistent in the ocean, with some common plastic pollution lasting hundreds of years. Fragments of plastics can enter the food chain, and other garbage in the marine environment may also smother the seafloor or bind around animals.

Garbage also damages the amenity value of beaches and can form a navigational hazard, damaging hulls and disabling the cooling and propulsion systems on vessels. These aspects of garbage pollution can jeopardise safety and be costly for businesses.

New Zealand signed up to Annex V (Regulations for the Prevention of Pollution by Garbage from Ships) of the MARPOL Convention in 1998. To give effect to Annex V, New Zealand has a suite of marine protection rules and regulations, under the Exclusive Eocnomic Zone and Extended Continental Shelf Act, the Maritime Transport Act and the Resource Management Act. These work together to create a comprehensive regime in New Zealand waters, as illustrated in the figure below: 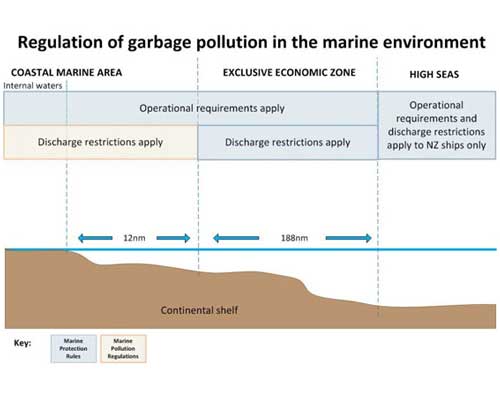 All vessels, from large ships to small dinghys, are regulated by marine protection rules for the Prevention of Pollution by Garbage from Ships (Part 170), although some requirements are conditional on the size of the vessel or number of people on board.

The rules were strengthened in 2013 by introducing a generally prohibitive regime that further restricts the types of material that can be discharged.

The rules regulate this issue using two approaches – restricting the discharge of almost all material, with a few exceptions, and requiring operational measures such as signage, garbage record books and garbage management plans, to ensure garbage is effectively managed on board.

Food may be discharged beyond 3 nautical miles from shore if it is ground up, and vessel operators are now prohibited from discharging cargo residues and cleaning agents if they are harmful to the marine environment. Lost fishing gear that poses a threat to the marine environment or a navigation hazard must now be reported in addition to recording these losses in the garbage record book or logbook.

For most boaties, following the “Reduce, Reuse, Recycle” principles (that are commonly applied onshore) is a pragmatic approach that will protect the marine environment for future generations. At sea, it is particularly important to make sure garbage is stowed where it will not be washed or blown overboard if the weather deteriorates. Or more simply, “Don’t throw it – stow it”.