Rena was carrying 1,368 containers and 1,733 tonnes of heavy fuel oil when it struck the Astrolabe Reef and grounded. Significant amounts of oil leaked into the environment after conditions deteriorated.

Maritime New Zealand ©2023
A worker negotiates his way around thick oil, which washed up on beaches.

Early in the morning of 5 October 2011, the cargo vessel Rena struck Astrolabe Reef 12 nautical miles off Tauranga and grounded.

The 21-year-old 236-metre Liberian-flagged cargo vessel was en route from Napier to Tauranga and travelling at around 21 knots when it struck. Its bow section was wedged on the reef, and its stern section was afloat. Two of its cargo holds flooded and several breaches were identified in the hull. There was 25 crew on board Rena at the time of the grounding.

Rena was carrying 1,368 containers and 1,733 tonnes of heavy fuel oil (HFO) on board at the time of grounding. An oil leak was detected on the night of night 5 October and a salvor, Svitzer, was appointed by the vessels owners and insurers the next day.

The salvage team began working around the clock in extremely dangerous conditions to secure the vessel and make preparations for the complex task of pumping the HFO off. 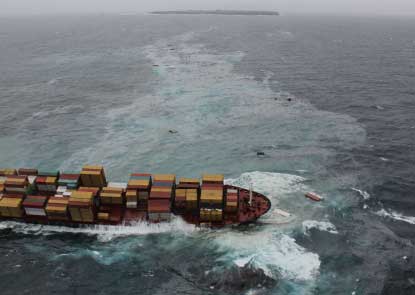 Unfavorable conditions led to the loss of cargo, much of which washed up ashore.
Maritime New Zealand ©2023

The salvors began removing the estimated 1,350 tonnes of oil in various tanks on Rena on 9 October but were hampered by bad weather, equipment breakdown and hazardous and changeable conditions.

A storm overnight on 11 October resulted in the loss of an estimated 350 tonnes of oil from Rena, some of it washing up at various points along the Bay of Plenty coastline. Continuing bad weather the following night saw 86 containers lost overboard. A further 5–10 tonnes of oil was lost from the vessel overnight on 22–23 October.

Over 1,300 tonnes of HFO was eventually recovered from Rena, with all of the accessible oil removed by 15 November. Containers lost overboard during bad weather were intercepted and recovered, where possible, along with dispersed container contents that washed up. Container removal operations from Rena began once all of the oil had been removed, with the first container lifted off on 16 November 2011. By 26 December, a total of 341 containers had been removed.

On 8 January 2012, Rena separated into two pieces and an estimated 200–300 of the approximately 830 remaining containers were lost overboard. The condition of the vessel had been gradually deteriorating during the time it was grounded on the reef, with more accelerated deterioration during stormy weather.

On Tuesday, 10 January the stern section of Rena began to change significantly, with about 75 percent underwater by 10am. The stern section completely sank in early April, with the front of the section in around 23 metres of water and the rear in around 65 metres.

Salvage continued and was managed by Resolve Fire and Salvage. Container recovery was managed by Braemar Howells, and beach monitoring was carried out by the Bay of Plenty Regional Council.

Rena’s insurers, The Swedish Club, indicated they were exploring the possibility of leaving a part of the Rena on Astrolabe Reef.

An independent review was conducted into Maritime New Zealand’s response to the MV Rena incident on 5 October 2011.

Simon Murdoch was commissioned as in independent reviewer to examine the Maritime NZ response to the Rena incident and establish the factors that contributed to or limited its effectiveness. The reviewer had access to the documents he required and, between 25 September and 30 December 2012, held more than 80 meetings with response participants and stakeholders in Wellington, Tauranga and Auckland. The Independent Review was published in March 2013. 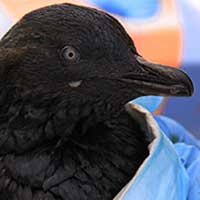